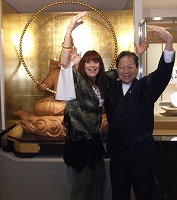 I had the most heartwarming experience right after saying good bye to you today.  I thought you would appreciate my experience!!

While waiting for the train in the waiting room, I opened my box of sweets that you had given me and I started handing them out to total strangers.

As I handed this small gift to each person, their eyes lit up in such complete surprise and delight. After I had given all of my candy away, this woman I had gifted the candies to, came up

to me and said, “I have never received anything from a foreigner. Thank you so much! Who are you?!”

Then I told her we had just returned from being with you and her face lit up again. She said, “I just read him on facebook!”

As my trainers saw the affect my little candies were having on the people in the waiting room, all 3 of them + Yui, my translator, quickly followed my lead and handed out their candies as well.

Then one of the women Cici had gifted her candies to, handed all of us a gold chocolate.

In a moments time, we had transformed the somber waiting room to a place of total happiness!! As the people departed to get their trains, they happily waved to us goodbye.